A cities transport network is about distributing people around and throughout its businesses and services.

Although Sydney’s past planning has focused on transporting to and from the CBD, it’s future planning needs to distribute people around it’s suburbs.

First it will provide express trains from Olympic Park to the CBD. Second it will remove the senseless termination of Olympic Park services as a shuttle.

Services such as the Parramatta Road Light Rail provide a high frequency high capacity service throughout their regions and will distribute people to suburbs like Strathfield, Concord, Leichhardt, Camperdown, and Ultimo. 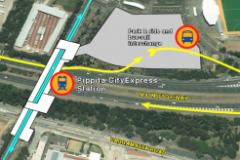 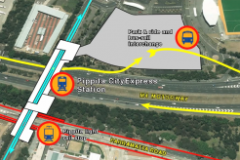 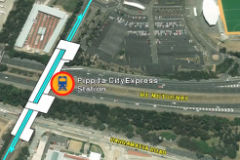 WestConnex: Greiner’s folly Part 3 – East-west axis – the problem & the solutions: Nick Greiner’s WestConnex proposal would cost at least $15 billion and take more than a decade to complete. In this video series EcoTransit will show that that would be time and money tragically wasted. Part 3 looks at Sydney’s east-west axis, whose major roads are the M4 and Parramatta Road. Modifications and additions to these would form the northern arm of WestConnex.

This video shows that the road ‘problem’ lies mostly between Strathfield and Sydney CBD and is confined to the AM and PM peaks. Given that Sydney’s traffic has flatlined for almost a decade and demand for public transport is rising relentlessly, removing a handful of motorists from the road during these periods would solve the problem.

‘WestConnex – Greiner’s folly’ demonstrates that a few strategic light rail projects worth a fraction of the cost of WestConnex would significantly reduce road traffic in the east-west axis by meeting demand for public transport, particularly in the peaks.